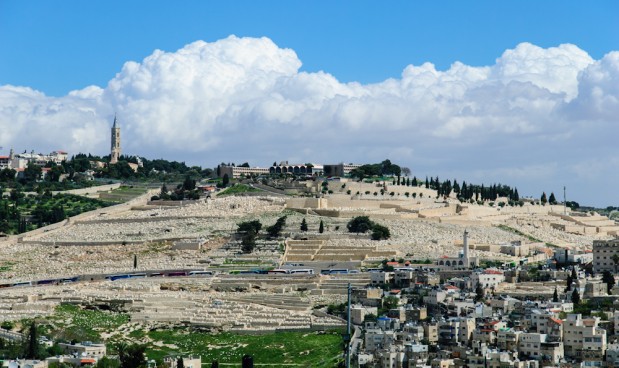 The Mount of Olives

We begin our day atop the Mount of Olives, overlooking the city of Jerusalem.Â  This was the site of vast olive groves and gardens at the time of Jesus. It was also the site of ancient cemeteries dating back to the earliest history of the region. Today this mountain is still an active cemetery, perhaps one of the very largest in the world, as many thousands are buried here.

The Mount of Olives is where we begin a special journey walking in the very footsteps of Jesus from His triumphal Palm Sunday arrival in Jerusalem to His arrest in the Garden of Gethsemane.

After an overview of the Temple Mount from Avi, we make our way down the steep winding path that is known as the Palm Sunday Path that leads to the Garden of Gethsemane.Â  We pause at a place called Dominus Flavius, â€śOur Lord Weeps.â€ťÂ  Itâ€™s a little chapel that is dedicated to the event recorded in Matthewâ€™s gospel (Matthew 23:37). This site gives us a splendid view of the Eastern Gate of the city.Â  Dale, one of our experienced Israeli pilgrims, said â€śThe most meaningful place in Israel is the Eastern or Golden Gate. It is precious to me because one day when Jesus returns, Christians will be with Him as He goes into the city of Jerusalem through this very gate (Zechariah 14).Â  This is my Hallelujah site.â€ť

The Garden of Gethsemane

We continued our walk down the Mount of Olives, following the traditional Palm Sunday Path to the site of the Garden of Gethsemane.Â  We see red poppies amid stone paths, and Avi points out that in the center of the poppy a cross can be seen! Some of the massive, old olive trees here date back more than a thousand years. We enter a private garden where we are treated to a song from Patsy. Then Pastor Ken led us in a song and a prayer. We were given time in this solemn garden to pray privately and reflect on the significance of this place.

In the days ahead after we return home, we will always remember being able to pray in this special spot.

The House of Caiaphas

We move from the garden up the hill to what many believe is the site of the house of Caiaphas the high priest. There is a great deal of archeological evidence to support this location as the place Jesus was brought before Jewish temple authorities. The steps that lead up from the Kidron Valley are the ancient stone steps that Jesus would have walked upon.

The house of Caiaphas contained a jail where prisoners of â€śJewish authorityâ€ť could be detained, even punished. These prisoners could not be scourged or killed because this level of punishment was left only to the Roman authority.

Jesus was before the Sanhedrin here and this was also where Peter denied Christ. We know from the gospel accounts that Jesus was beaten here. He was also most likely whipped with reeds or tree branches. The house of Caiaphas is also where we find â€śthe pitâ€ť. This was a simple and effective way of keeping prisoners. We were actually able to see the place where Jesus was beaten and we also were able to go down into the pit.

While there, Mike, one of our Sunday school teachers, read Psalm 88:

Â 6Â You have put me in the lowest pit,

in the darkest depths.

7Â Your wrath lies heavily on me;

you have overwhelmed me with all your waves.[d]

8Â You have taken from me my closest friends

and have made me repulsive to them.

I am confined and cannot escape;

9Â Â Â my eyes are dim with grief.

This is a powerful place and will provide an entirely new perspective on the passion of Christ that unfolded during that fateful Passover.

The City of David excavations are some of the latest archeological excavations in Israel. The city itself is thought to contain the earliest structures in Jerusalem including Davidâ€™s palace. These structures date back 3000 years and provide further evidence to Jewish claims on the land. We explore these excavations including entering Hezekiahâ€™s Tunnel – some rather narrow tunnel systems that fed water to this ancient city. Â We emerged from the tunnels and our guide takes us for a short walk to our next site.

The Pool of Siloam

Â With just a short time left in the day, Avi, our guide, took us to a special memorial that overlooks the city of Jerusalem.Â  Itâ€™s a memorial to those who died in the Yom Kippur War in 1973; there are several names listed that Avi knew personally.Â  Pastor Mark read Psalm 91 in English and then Avi recited it in Hebrew.Â  This was a sobering moment for our group.

One last quick stop of the day was at Kibbutz Ramat Rachel which offered us a view of Bethlehem and shepherds fields. Â We remembered the birth of our Savior by singing a couple of Christmas carols.

We returned to our hotel and re-grouped for a special meeting with our Hope for Israel friends. Samuel Smadja, owner and president of Sar-El Tours, spoke about presenting Jesus as the Messiah in the marketplace.Â  Pastor Mark has used Sar-El Tours for many years to coordinate Words of Victory Ministriesâ€™ tours of the Holy Land.