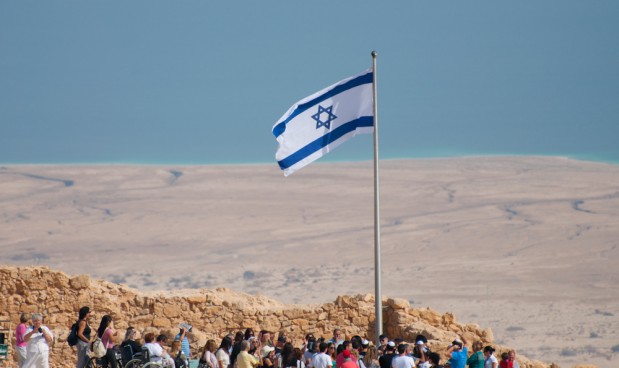 Our day started with a visit to Masada, the desert fortress that Herod built around 31 BC. This place had it all â€“ dovecotes, storehouses, a complex cistern system, two palaces, a heated bathhouse, a gardenâ€¦ Everything. It was abandoned upon Herodâ€™s death, but was repurposed in 70 AD. A group of rebel Jews, fleeing Jerusalem after the Romans destroyed the temple, made Masada their home. They lived off of the stores Herod had left behind, and the still-full cisterns. Even though they had the superior ground, they knew that their time at Masada was limited.

In 73 AD, the romans caught up to them, and spent months constructing siege walls and encampments. They also built a huge siege ramp, most of which can still be seen today. Despite the best efforts of the rebels, eventually the Romans broke down the rebel defences. Using a siege tower and battering ram, the Romans managed to break through the last of the walls surrounding the city. Sure of their victory, they returned to their encampment to await the dawn. But the rebels had other ideas.

After an impassioned speech made by their leader, Eleazar, in which he urged the men to kill their wives and children before they ever tasted of abuse or slavery, 960 people lost their lives on the top of Masada. Before the mass suicide, the fortress was set aflame â€“ everything except for the storerooms, that is. The rebels wanted to show the Romans that it was not for lack of food that they had killed themselves, but that they would rather die free than live in slavery.

This is a very important site for the Jewish people, who swear that â€śMasada shall never fall again.â€ť We were able to spend almost two hours in the ruins, exploring the storehouses & other buildings. We had a time of reflection in what was once the rebelâ€™s synagogue, where Trey read the final speech from Eleazar. Our group split a little here, with some taking the long winding steps down to Herodâ€™s Northern Palace, and a smaller group exploring some of the more recently discovered & restored ruins, including a mikvah (ritual cleaning bath) and a huge cistern. Once we had all regrouped & traveled down the cable car to the base of the mountain, we reboarded the bus & made the short drive to Qumran, where we had lunch & a bit of shopping.

After lunch, we began to learn of the significance of this site. This is where the Dead Sea scrolls were found in 1948! As we walk through the ruins that they have uncovered, Yuval tells us of the religious sect, the Esseians, who once lived here. They were a group devoted to purity and studying scripture, and the scrolls that they hid in their caves were probably their most treasured possessions. They probably never thought that they would remain there, untouched for 19 centuries, until a Beduin shepherd boy looking for a lost lamb threw a rock into a cave and rediscovered them they very same day that Ben Gurion declared Israelâ€™s statehood. What a powerful testimony for Israelâ€™s claim to the land!

After Qumran, we took a few minutes to float about in the Dead Sea. Many of our group, including Kathy & Trey, covered themselves from nearly head to toe in the dark, smelly mud, while others simply floated and enjoyed their buoyancy. It was simply hysterical to watch!

After everyone had (mostly) gotten themselves cleaned up, we began our ascent into Jerusalem. We listened to some praise and worship songs as we drove the old Jericho road into the City of David. As we came out of the tunnel and caught our first glimpse of the sparkling lights of Godâ€™s Holy City, many people were moved to tears. Jerusalem is a beautiful city by anyoneâ€™s reckoning, but to see it illuminated in the night is a powerful thing indeed. We stopped on an overlook, where we had a time of prayer and reflection. Wether they were a first time pilgrim to Jerusalem or this was their 3rd or 4th time, everyoneâ€™s eyes were alight with joy as we gazed upon the city. We went to our hotel for the night, to enjoy dinner and to get some rest before we spend our first day touring Jerusalem tomorrow.