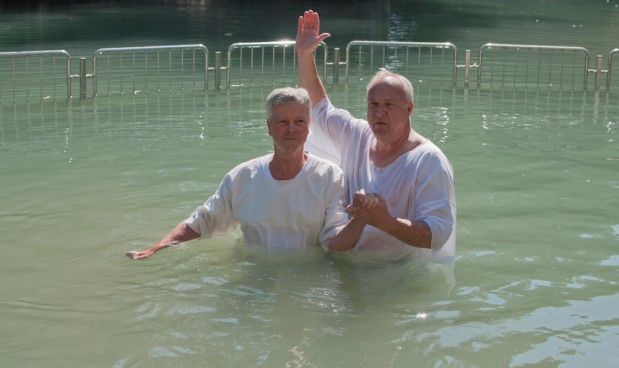 Today was another full day of touring, and we covered a lot of ground! Our morning began with our final stop in Galilee, Capernaum. This is the town where Jesus based His ministry, & where He preformed most of His miracles. Here is where He cured the woman with the blood sickness, healed the servant of the centurion, healed Peterâ€™s mother-in-law, and did many, many other works. The city lies in ruins, but there are many buildings that are still recognizable, including the house of Peterâ€™s mother-in-law, many homes, and the 4th century AD synagogue that was built on the foundations of the one that Jesus would have taught in. As we stood on the cool limestone, feeling the heat of the morning sun on the back of our necks, Mark reads to us from Mark 1:21-28, which is the story of Jesus casting an impure spirit out of man while in the synagogue in Capernaum. He reminds us that we struggle not just against the physical element, we also struggle against the spiritual.

After we had taken some pictures of the amazing city, we quickly headed down to the banks of the Jordan River, where some of our members were baptized! Kathy Wyatt, & Lillian & Samuel Flory were baptized by Mark Jenkins, following in the footsteps of Christ as they followed Godâ€™s instructions in the very same river that Jesus himself did! After they had dried off (& a few of us had the chance to feed some muskrats) we did a little shopping before reboarding the bus for our drive to Bet Sheâ€™an!

Bet Sheâ€™an, also called Skitoplis in ancient times, was completely destroyed by an earthquake in 749 AD & was never rebuilt. It is possibly the most complete set of Greco-Roman ruins in existence today. The Cardo, or main road, bathhouse, amphitheater and many other buildings stand reconstructed using their original stones. Walking through this amazing city really gives you the feeling of what it would have been like to be alive in ancient times â€“ it is easy to imagine vendors hawking their wares along the Cardo, long lines in the public bath (yikes!) or a performance in the large amphitheater. It is easy to spend hours wandering around this massive city, checking out the new dig sites & walking along paving stones that still show the evidence of the massive quake that leveled the city. Sadly, we have all too little time here, and we head towards a local kibbutz for a quick lunch before making our final stop for the day â€“ Gideonâ€™s Spring, or Maâ€™yan Herod.

This spring is the site of a very familiar bible story â€“ God selecting Gideonâ€™s army for his battle against the Midianites. In Judges 7, we learn that Gideon had an army of 32,000 men to face Midianâ€™s 135,000. God wanted there to be no doubt that it was because of Him that Israel won the battle. So, He had Gideon send home all the men who were afraid. That downsized his army by 22,000 people. Still, God said that Gideon had too many men. So, he had Gideon bring his men to this spring, and ask them to drink from it. Those who cupped their hands to drink, God selected for His army. Those who kneeled to drink, God sent home. 300 men were leftâ€¦ But God still defeated the Midianites, and in quite a spectacular fashion! The spring is located in a beautiful park, and although the water level was lower than usual (it is fed by snowmelt & rains), it was a lot of fun to pretend to drink the water as Gideonâ€™s men would have!

We had a long journey ahead of us to Eilat & our hotel for the night, but despite the six hour bus ride everyone seemed to enjoy looking at the desert scenery & getting their first glimpse of the Dead Sea. We arrived safely in our hotel for the next two nights, and we are very excited for our trip to Petra tomorrow!