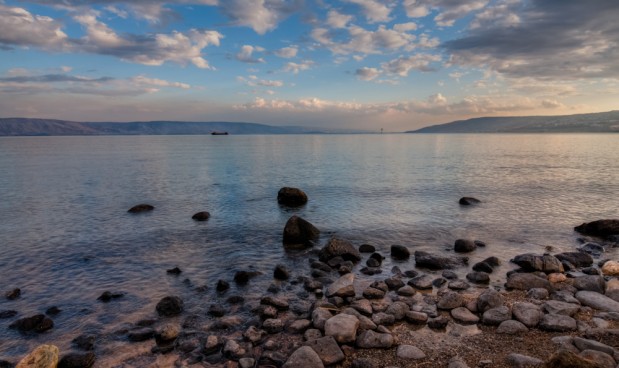 We began the morning with a brisk walk from the hotel down to the shores of the Sea of Galilee, and boarded one of the â€śJesus boatsâ€ť â€“ a replica of a fishing boat that would have been used around the time of Christ. The crew of this particular boat is one of the few that are actually believers, and we are treated to some live worship songs, sung in both Hebrew and English, as we sailed across the glass surface of the sea. In the middle of the water, the captain cut the engine and we idled, drifting slightly, as we listened to Mark retell the story of Jesus calming the storm, as found in Matthew 8. We are reminded of a few important points regarding this particular tale â€“ that Jesusâ€™ presence did not prevent the storm from happening in the first place, and that even though the storm was raging, Jesus still slept on. And why shouldnâ€™t He? He trusted in His Father to protect Him, why should He be worried? Despite the fact that Jesus was present, His disciples were still fearful for their lives, and even though they had little faith, Jesus still saved them & calmed the storm. This should be an encouragement and a challenge to us â€“ we should strive to have more faith that God will take care of us, but even though we will fall short of His standards, He will still rescue us from our predicaments!

After a short time of prayer on the boat, we sailed into the harbor & enjoyed a moment walking through the gift shop & museum, which houses an actual fishing boat from the time of Christ. Once we had selected a few small souvenirs, we returned to the bus for a quick drive up the coast to the Mount of the Beatitudes, where one of the Christâ€™s most recognizable sermons was delivered, and the feeding of the 5,000 occurred. As we read through Matthew 5, & listened to Dr. Meloy recite the Beatitudes, we are reminded that the point Christ was trying to make was that itâ€™s â€śwhatâ€™s inside that countsâ€ť, to use a trite turn of phrase. How can we be the light of the world, if inside we carry around nothing but anger, hatred, or naked ambition?

Once we had had a chance to explore the beautifully-maintained garden on the site, and peek into the basilica, we returned to the bus for our hour-long trip through the Golan Heights to Caesarea Philippi, or Panias. Jesus used this site, which was once one of the most pagan centers of His time, to make an important point to His disciples. As told in Matthew 16, He had them all make the two-day journey up into the hills, to stand at the mouth of a cave where ritual human sacrifices had been made to the god Pan for years, to ask them a question: â€śWho do you think that I am?â€ť It is Peter, of course, who answers â€śThou art the Christ, the Son of the living God.â€ť It is, perhaps, C.S Lewis who sums it up best.

â€śA man who was merely a man and said the sort of things Jesus said would not be a great moral teacher. He would either be a lunatic â€“ on the level with a man who says he is a poached egg â€“ or he would be a devil of hell. You must take your choice. Either this was, and is, the Son of God, or else a madman or something worse. You can shut him up for a fool or you can fall at his feet and call him Lord and God. But let us not come with any patronizing nonsense about his being a great human teacher. He has not left that open to us.â€ť

Jesus could only have been one of four things: a legend, a liar, a lunatic, or Lord. There is more than sufficient historical and archeological evidence to support His existence, so He was not a legend. If Jesus lied, why would He choose death for His claim? And if He were a lunatic, how did He managed the intellectual debates with his opponents, or maintain a deep love for His antagonists during the crucifixion? Christ said He is the Lord, and evidence supports His claim.

Once we had explored the ruins of the Panias, we drove for a little while longer in the Golan Heights until we reached an overlook. Standing on the hill, to our north we overlooked both the Valley of Beka (also called the Valley of Tears), and the border into Syria. Here is where a great many battles were fought during both the Yom Kippur War in 1973, and the Six Day War in 1967. As we stared at a country that has the potential to cause Israel great suffering, Mark read Psalm 91 to us in English, and Avi recited it from memory in Hebrew. As we watch UN vehicles drive around the border, and a Syrian flag flapping in the breeze, we are reminded that it is, indeed, Godâ€™s hand that keeps Israel together.

Once we finished in the Golan Heights, we returned to Galilee for a late lunch at Kibbutz En Gev. This is the kibbutz that serves the amazingly tasty St. Peterâ€™s fish â€“ cooked like they would have in the time of Christ, head & tail & all! It is a meal that everyone enjoys, and even our first time pilgrims loved it!

After our late lunch, we made our final stop for the day, at Tabgha, or St. Peterâ€™s Primacy. This is the speculated location of the meal that Jesus cooked for His disciples in John 21, after His resurrection from the dead. This is also where He forgave Peterâ€™s denial of Him before the crucifixion, and tasked him with feeding his lambs. What a wonderful story of forgiveness, and such a beautiful reminder that even though we will mess up, and we will sin, Christ will always forgive us. We take some time to pick some shells from the shores of the lake, and enjoy the beautiful light from the setting sun before we return to our hotel for the evening. Tomorrow, we will leave Galilee and begin our journey towards Eilat!