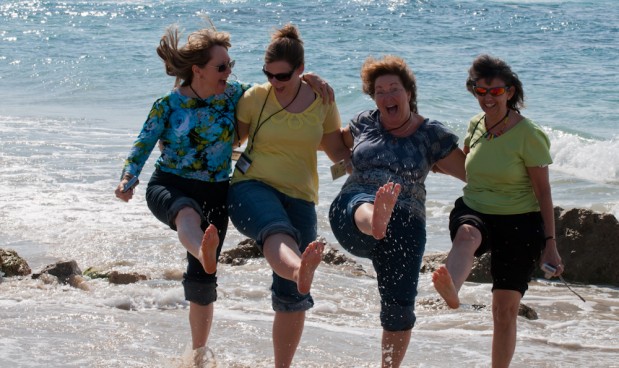 Today, we began our first full day of touring the Holy Land with a trip to Caesarea Maritima, the ancient port city that Herod built during the time of Roman occupation. Now, this city stands in ruins, a skeleton of the once-thriving port that rivaled even nearby Joppa in its industry. As we sat on the steps of the amphitheater that Herod constructed to help control the masses, basking in the warm sunlight, Mark recounted Acts 10, the story of Peter‚Äôs testimony to Cornelius, the Roman centurion. This stage marks the first place where a Gentile was truly converted ‚Äì previously, the story of Jesus‚Äô death & resurrection had only been brought to other Jews. As we sat on the cool marble, we could easily overhear other tour groups from different countries speaking in their native tongue ‚Äì Russian, German, and even Spanish were overhead. How amazing it is, to be able to witness such diversity at the very location where God‚Äôs providence first brought it about!

There is much to see in Caesarea, including the ruins of Herod‚Äôs palace, the hippodrome where chariot races were held, and the remains of a Crusader fort complete with dry moats. Avi guides us along, and points out some of the newly restored mosaics on the floors of the bathhouse and other locations. After we left Caesarea, we made the short drive to a nearby Roman aqueduct ‚Äì the perfect place to stick our feet in the Mediterranean! Almost our entire group got in on the action, including some who spontaneously broke into dance upon feeling the cool water over their toes. Once we had gotten most of the sand out from our socks and shoes, we returned to the bus for a short drive to a roadside restaurant where we introduced our first time pilgrims to that wonderful Israeli food ‚Äì falafel! It was so much fun to watch those who had never had the chickpea dish fall in love with the quintessential Middle Eastern dish.

Once we had finished lunch, we drove a little ways up the road to Mount Carmel, otherwise known as the ‚Äúplace of the burning.‚Äù Here is where Elijah declared the supremacy of our Lord over the false god Ba‚Äôal, once and for all! The story, recorded in 1st Kings, was recounted to us by Mark as we sat in the shade of a grapevine-laden garden. It is easy to imagine the sight of the false priests of Ba‚Äôal, shamed after their powerless god failed them, running down the mountainside pursued by angry Israelites! We are treated to a view of the Valley of Megiddo, also called Armageddon, from an overlook on top of the monastery on site. Even though it is fall, and very few crops are still in the fields, it is easy to see that the fields below will be lush and verdant, filled with growth and a great source of prosperity for the nation of Israel. This large tract of land will one day be the site of the final battle between Jesus and the forces of Satan. In the distance, we can see the city of Nazareth, where Jesus grew up. It is plain to see that He would have grown up in full view of the valley where He knew the Final Battle would take place ‚Äì how amazing, to know that even before His ministry started, He knew the outcome of the war!

After we had taken our fill of pictures, we returned to the bus for a trip a little further down into the valley below, to visit the Tel of Megiddo. A Tel, or biblical mound, designates a city that has been built and rebuilt and rebuilt, layer on top of layer, for centuries. Tel Megiddo itself has 20 such layers, spanning from the end of the 6th millennium BC to its abandonment in the 5th century BC, and its many settlers include the Canaanites, the Egyptians, the Israelites under Solomon, and even Assyrians and Persians. Many prominent features of the city remain, such as stables, a granary, and an altar which was once used for child sacrifices. As we stand on a hill, once again looking into the Valley of Armageddon, looking at both Nazareth and Mount Carmel, we are reminded of the contest that we spoke of on the mountain. The next time God demonstrates His power, it will be in the valley below that mountain. This valley is one of decision. We are faced with a choice ‚Äì which side do you chose? Will you, like Joshua, chose to follow the Lord? (Joshua 24:15)

Once we leave Tel Megiddo, we ascend up another mountain to the city of Nazareth, where Jesus was raised. We reach an overlook call the Mount of the Precipice, which, (surprise!) overlooks the Valley of Armageddon. In Luke 4:14, Jesus is described as going to the synagogue to teach after beginning His public ministry. After reading Isaiah 61, and declaring Himself the fulfillment of the prophecy mentioned, the people became so furious that they attempted to throw Jesus off of the side of a cliff. The people of Nazareth could not see Jesus as anything more the Joseph‚Äôs son, a humble carpenter. If only they had been able to look past their preconceived notions of the man they thought they knew, to see the truth of His deity!

The view from the top of the mountain is beautiful, and we arrive just in time to catch the sunset. After we snap a few pictures, we return to the bus to head for our hotel in Tiberias, to rest up for a full day of travelling in Galilee tomorrow!

We are having technical problems with the internet here in Tiberias. Not all of the photos for today are up. Please check this page again tomorrow for more photos. Thank you!