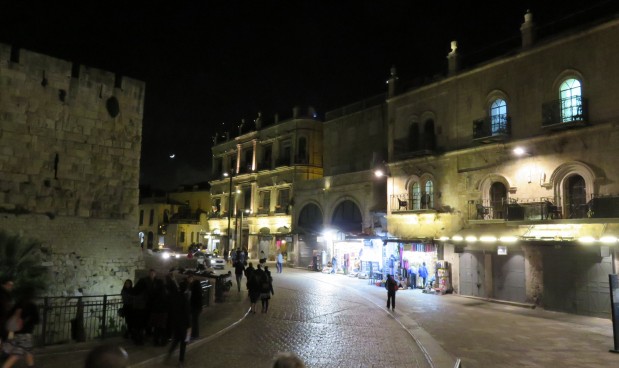 We started our day at Yad Vashem, the place of remembrance, where we are privileged to be on a specially arranged guided tour of this memorial with Hazy Flint. Â She is a friend of Mark Jenkins and is one of the best guides to take guests though the exhibits on the grounds here on Mount Hertzel – she can tell the story of the Shoah in a way few can.Â Our media team spent the morning filming for Christian frinds of Yad Vasem as part of thier work on the international broadcast of the ceremony marking the day to remember the heroes and the martyrs of the Shoah, or Holocaust .

Itâ€™s a lot to take in, but Hazy has a way of really condensing the history down to its most relevant and most powerful points. This was a very hard lesson today for our group. It was absolutely horrific what happened to the Jews and their friends during those dark days under the Nazi regime.Â  â€śWe must never forgetâ€ť â€“ and that is part of the mission of Yad Vashem.

Today we see the evil that exists in the world as we walk through the exhibits. Kurt Tucholsky, a German essayist of Jewish origin wrote, â€śA country is not just what is does â€“ it is also what it tolerates.â€ť Â A lesson from Yad Vashem is that evil triumphs when good men do nothing. Â This is a depressing place, but it carries a valuable lesson. Â As we emerged from the dreariness of the exhibits, we stepped out into the light on a large platform that overlooks the city of Jerusalem. Â It was here that we discovered hope! Â We saw a city that was birthed out of the ashes of the Holocaust, a vibrant city that says, â€śThe land of Zion livesâ€ť.

Afterward all rs gathered for lunch at Yad Vashem, with Susanna Kokkonen, the Director of Christian Friends of Yad Vashem, and her assistant Shavit. We then headed to Latrun, an army base located on strategic high ground that overlooks a plain. This is also the site of the armor museum which features tanks used by the Israeli Defense Forces (IDF) in the wars to protect Israel.Â  We also saw tanks that Israel captured from opposing forces in many of these conflicts. Â We were able to climb on one of the tanks, a Merkava Mk III, and have a group photo.Â Our guideÂ for our visit is a twentyÂ year old Israeli soldier named Nurit.

Either by coincidence or by divine providence, she takes us to the memorial panel for Operation Protective Edge – last summer’s campaign in Gaza . This was the operation our Israel Initiative and Hope for Israel participants raised funds during in order to purchase knee pads, which were in turn donated to the IDF soldiers.

This active IDF base is also a place where the war memorial stands. Â It shows the sacrifice that Israel has made to protect her people.Â  As we talked with several of the soldiers, some of our group handed them a gift, a bandanna with Psalm 91 printed in Hebrew and English.Â  We also thanked them for their service to their country.

At the Wall of Remembrance, the name of each soldier who has given their life for their country since 1948 is listed by conflict.Â Â We prayed for those who have lost loved ones and also for peace that we hope will come someday soon to this troubled land.Â Â Our guide, Nurit, was extremely touched by this prayer as her best friend died during Operation Protective Edge.

Fourteen of our group trekked into the old city of Jerusalem, led by Pastor Mark Jenkins, and journeyed to theÂ Kotel or Western Wall, for the opening ceremony of Yom Hazikaron, the Memorial Day observed in Israel for those who have given their lives for their country.Â Our group entered the city at theÂ Joppa Gate,and we grabbed a quick meal of a chicken kabob sandwich in the Armenian quarter before heading down towards the Kotel. We weaved through the old city, not making a single wrong turn to find our selves at the golden menorahÂ that sits above the stairs that lead down to the Western Wall plaza . To our surprise, we were able to enter the plaza and take part in the official opening ceremony. Flags were lowered to half-mast and we heard sirens at 8 p.m., since a day begins at sunset here.Â Â The sirens lasted for one minute, during which Israelis all over the country stopped everything (eating, walking, even driving, which stopped highways!) and stood in silence, commemorating the fallen and showing respect.Â What an incredible experience to stand there as the sirens sounded to mark the official beginning of the day to remember those who gave their lives to defend Zion. We stood there amongÂ the leadership of Israel and with thousands of Jerusalem citizens.Â It was well worth the overÂ four mile round trip walk to be a part of this remembrance!