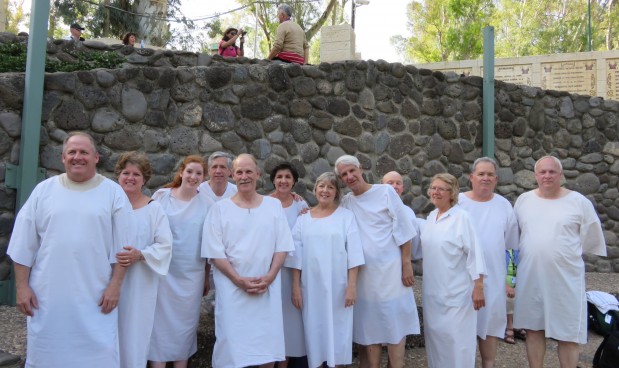 Our first stopÂ of the day was to the traditional site of the famous Sermon on the Mount, called the Mount of Beatitudes. Â There is an 8-sided chapel as well as a series of beautiful gardens as a commemoration of what has been called the â€śbeatitudesâ€ť, a series of blessings that are recorded in the gospel of Matthew 5:3-12. Pastor BectonÂ led us in a time of meditation on the Model Prayer that Jesus taught the disciples right here!

Our guide, Yuval, had a special treat for us at Korazim (Chorazim), one of the cities on which Jesus pronounced woes.Â  We were able to stand inside the ruins of a first century synagogue.Â  Just think, Jesus may have taught in that very synagogue and we were there! Â Terrie led the group in a special prayer for mothers and grandmothers.Â Mark Jenkins reminded us that we were standing in the evangelical triangle (went to Capernaum and Bethsaida yesterday and Korazim today).Â Â These cities had full knowledge of Christ and turned away from Him – and were destroyed, never to be re-built.

Our guide, Yuval, added a surprise site for us – Hatzor, a Canaanite city that was expanded and fortified by King Solomon (1 Kings 9: 15).Â Â This large city is about nine miles south of the Sea of Galilee.Â Â We saw many of the ‘original’ stones used in the six-chambered gates and walls.Â Â Yuvall also showed us burn marks on the stones, proving that the city was destroyed by fire – was re-built and destroyed again! Â Pastor Becton read II Chronicles 20:15 to remind us that we are not to be afraid as the battle is not ours, but the Lord’s!Â Â Time after time, there have been battles and when Israel trusted and worshipped God, they were victorious – the same for us today!

We boarded our bus and then headed up onto the Golan Heights â€“ our destination is Panias. This mountain city was a pagan shrine dedicated to the half man half goat pagan god â€śPan.â€ť The caves in this mountain were believed to be the entrance to the underworld. This site was venerated by the Canaanites, the Greeks, and eventually the Romans. Each civilization made their mark on the site.

We learned that by the time of Christâ€™s ministry, Herod the Greatâ€™s son Phillip had renamed the city Caesarea Philippi, to honor Caesar. This city was a very important religious center in the time of Jesus and is where Jesus brought his disciples â€“ many miles from Galilee. The disciples no doubt were wondering why they would make such a long journey to a pagan center.

It is here Jesus challenged his closest followers (and Mark Jenkins challenged us) with a question, â€śWho do you say I am?â€ť We know from scripture that only Peter answers correctly, â€śThou art the Christ, the Son of the living God.â€ť Â Pastor points out that this question Jesus asked his disciples is a question still asked by the world today. Â Itâ€™s the most controversial question and one we must all answer.Â Jesus gave additional evidence of who He is by giving the disciples (and us today) the “I am’s” in the gospel of John:Â Â the Bread of Life, the Light of the World, the Gate, the Good Shepherd, the Resurrection and the Life, the Way, the Truth, and the Life, and the Vine.

We took a few moments to explore the ruins and saw the cave that was once believed to be the entrance to Hades. Â Caesarea Philippi is located at the base of Mount Hermon, Israelâ€™s tallest mountain and the place where many believe the transfiguration of Christ occurred. This is also where the headwaters of the Jordan flow.

As we leave the northern part of Israel, we travel through the Golan Heights, stopping where we can see snow on the top of Mount Hermon. Â Our bus driver did an amazing job along the curvy mountain roads! Â As we traveled, we caught Â a glimpse of Syria, and Yuval explained some of the details of the Yom Kippur War in 1973 – some of our pilgrims’ eyes were big!Â Â Then we traveled along the eastern side of the beautiful Sea of Galilee to one more stop.

On our way to our hotel, we stopped at Yardenit, a place of baptism. Many who come to Israel want to be baptized in the Jordan River. Â Mark Jenkins is always ready and willing to enter the chilly water to immerse those who come to the Holy Land. Today 11Â members of our group entered this part of the Jordan River. Â Itâ€™s cold, itâ€™s slippery, but it is an experience worthy of the sacrifice. Itâ€™s also a chance to say something to the Lord, â€śI love you, I believe in you, and I want to follow youâ€ť.Â This was a very meaningful experience for one who had been baptized as a child, then asked Jesus to be her Savior.Â Â “This was the perfect opportunity for my baptism to mean something – to show God that I’m willing to go ‘into the deep’ with no borders for Him.