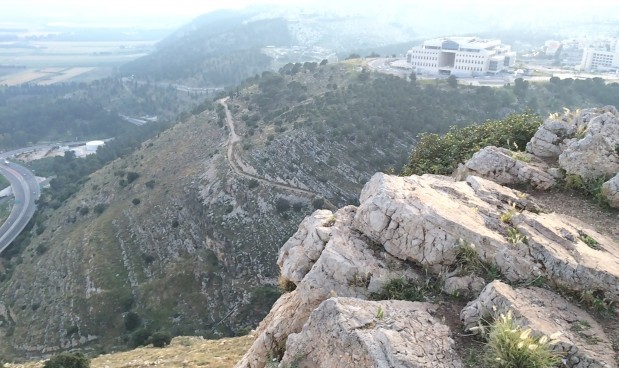 After checking out of the hotel, we boarded the bus for our first stop, one that is meaningful to the nation of Israel. ┬ĀIndependence Hall, originally the Dizengoff House, is where David Ben Gurion declared Israel a sovereign nation on May 14th 1948. ┬ĀThis is also where he and other Jewish leaders signed IsraelŌĆÖs Declaration of Independence. ┬ĀŌĆ£Independence HallŌĆØ is located on the historic Rothschild Boulevard in Tel Aviv, Israel.

We heard recordings of speeches from that historic day and also a recording of IsraelŌĆÖs national anthem ŌĆō the HaTikvah┬Ā(means ŌĆ£The HopeŌĆØ). ┬ĀWe read from Isaiah 66 and celebrated the miracle that is a nation reborn. Yuval also read from Isaiah 11:11, and reminded us of the historic regathering of Jews from all corners of the globe – Ashkenazim and Ethiopian alike – to their promised homeland.┬ĀFor centuries Israel as a nation has been little more than a Bible story for most Christians, yet it remained as the hope (Hatikva) of nearly every Jew. Today we had the unique privilege to stand in the very spot where David Ben Gurion declared Israel a nation in direct fulfillment of many ancient prophecies ŌĆō the impossible has happened! ┬ĀA nation is born and reborn in a day just as the prophets of old predicted!┬ĀOne in our group was overwhelmed and stated: ‘My whole life of 69 years and I had no idea.┬Ā┬ĀTo stand in the room where Israel was declared a nation was awesome!’

Our next stop was Caesarea Maritima or Caesarea ŌĆ£By-the-SeaŌĆØ. ┬ĀThis was the sea port city built by Herod the Great, was a major port in the time of Jesus, and was where the Roman garrison was headquartered in the land of Israel. The city took nearly 20 years to complete construction, and served as a base for legionnaires. The restoration here is truly impressive; you can really get a sense of the magnificence of this port city.

We saw several complex structures such as a hippodrome for chariot racing, a great seaport, light house, and the great amphitheater that we had the opportunity to explore. ┬ĀAt the amphitheater, Pastor Becton┬Āshared the story of St. PeterŌĆÖs encounter with the Roman centurion Cornelius. (He read Acts 10: 34-48.) ┬ĀThis is the place where the racial barriers came down ŌĆō this is where the Bible records the baptizing of the first Gentile believers! ┬ĀFrom here the gospel would travel out into the world.

We also saw the ruins of one of HerodŌĆÖs palaces. ┬ĀThis was indeed a palace by every definition. ┬ĀIt even had a large freshwater pool-right on the shore of the Mediterranean- now thatŌĆÖs luxury! ┬ĀBefore leaving Caesarea, we saw a portion of an aqueduct that carried water from the mountains of Carmel some nine miles away. ┬ĀItŌĆÖs amazing to see a structure that ŌĆśsophisticatedŌĆÖ from 2,000 years ago!

The other significant biblical reference to this place involves the apostle Paul who was imprisoned here before being sent to Rome. ┬ĀHe was brought before Agrippa the Roman prefect at that time. ┬ĀIn this very place, Paul simply shared his testimony of faith leading Agrippa to say that today he was almost compelled to be a Christian. ┬ĀThis experience reminded us to be willing to stand in defense of the gospel, to share our testimony about GodŌĆÖs faithfulness in our own lives.

After leaving Cesarean ŌĆ£By the SeaŌĆØ we headed up the northern coastal plain of Israel, also known as the Plain of Sharon ŌĆō on our way to the mountains of Carmel. We went to the Carmelite Monastery that marks the spot where Elijah fought the prophets of Baal. The monastery has a rooftop overlook of the Jezreel Valley. As we looked down into this beautiful valley, Pastor Jenkins┬Āshared that we were seeing proof of the truthfulness of GodŌĆÖs written Word.

Back on the bus, we made the bus ride to Nazareth, the home village of Mary and also the place of the ŌĆ£AnnunciationŌĆØ ŌĆō where the angel Gabriel appeared to Mary, telling her that she will give birth to a son. (Luke 1:26-31). ┬ĀWe were also reminded that Nazareth was the boyhood home of Jesus.

We visit Nazareth Village where we are welcomed warmly by friends. This place is truly unique ŌĆō itŌĆÖs as a fully functional replica of a first century village. ┬ĀWe toured the village seeing the harvesting of olives and the processing of olive oil. ┬ĀWe also see the preparation of food (including ours). Our hosts have prepared a first century meal for us and itŌĆÖs a real treat.

Our trip to Nazareth included a visit to a nearby precipice which provides a view of the valley of Jezreel, the town of Nazareth, and the surrounding countryside. ┬ĀThis rocky outcropping is where many believe Jesus was taken by an angry mob in an attempt to kill him by throwing him from the cliff. ┬ĀWe were challenged by Pastor Becton┬Āafter he read from Luke 4:┬Ā┬Āwe are to be prepared.┬Ā┬ĀIf those from His hometown tried to throw Jesus off a cliff, we need to be prepared for the actions of those we are close to when we share the Gospel with them.