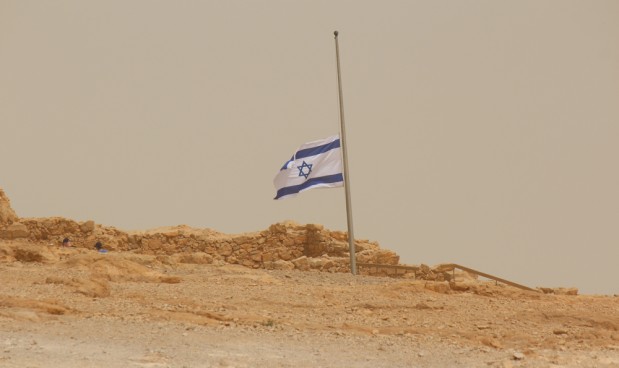 Today we drive out of Jerusalem and back down to the Jordan valley. Â We are heading into the Negev a rocky dessert that is part of southern Israel. There are three stops today the first is Qumran.

This is the site of the Essene village at the northern end of the Dead Sea. Â The ruins here date back to the Herodian era. The Essenes were a group of ultra-religious scribes who formed a commune here. They separated themselves from Â other Â religious groups in Jerusalem. Their handy work was a gift to the ages in what we refer to as the Dead Sea scrolls. This is a version of the torah that predates all other known copies of scripture. Â Â We explore the ruins of their settlement, and we look at the caves where these famous scrolls were found. 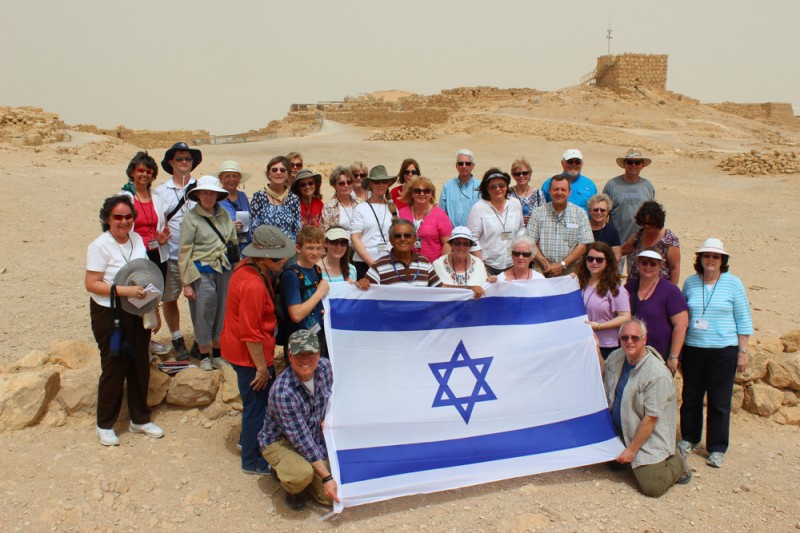 We travel further down the Jordan valley and alongside the Dead Sea to visit the dessert fortress of Herod the great.- Masada. Â Itâ€™s an impressive fortress built on a plateau nearly 1800 feet above the Dead Sea. It was built as a protected palace and garrison for Herods Â troops, however he died before ever having to use it. The fortress was instead a sanctuary for a band of Jewish zealots who fled the city of Jerusalem.

960 Jews including those who most likely started a Jewish revolt in Jerusalem lived here. Â They resolved “never to be servants to the Romans, nor to any other than to God Himselfâ€ť. Â Â The Romans eventually would lay siege to this fortress in an epic confrontation that would end in the death of all but a few of these zealots.

When the Romans breached the defenses of Masada, they were amazed to find all the defenders dead. Seven people (two women and five children) survived by hiding in a cistern.

Today, Masada is one of the Jewish people’s greatest symbols. Â Many Israeli soldiers climb this plateau and proclaim, “Masada shall not fall again.” Next to Jerusalem, it is the most popular destination of Jewish tourists visiting Israel.

Avi leads the tour of the plateau. Mark Jenkins led a separate group of the more adventurous members of the group on a side expedition down to the famous northern palace of Herod the great. Cherie and Ken Van Cura were in the group of 11 brave souls who climbed the numerous steps to and from the Northern Palace. When asked what their impressions were, Cherie said, â€śI exercise six days a week-the difficulty going down and back up was high, but it was absolutely worth it!

Of his experience on Masada Ken said, â€śMasada speaks to liberty and for man to be free, not enslaved.” 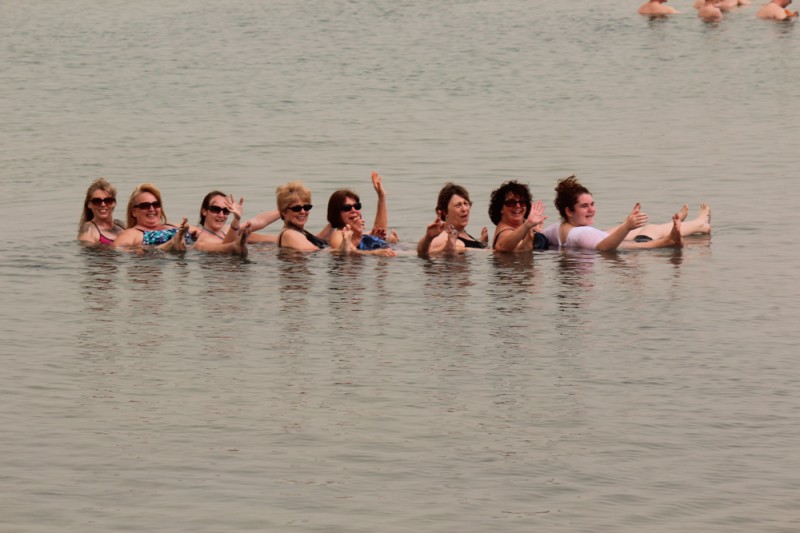 This is the lowest place on planet earth. It is also the saltiest sea on earth. Itâ€™s called a sea and it even looks like a sea but itâ€™s really a concentrated brine, not suitable for drinking, and not capable of supporting life.

We take a few moments for people to fully embrace the Dead Sea experience by getting immersed in the brine. The braver members of our group carefully began their descent into the sea, careful not to splash water because the salt in your mouth and eyes will burn. The mud is supposed to be a beauty treatment, so we see some people pile it on in hopes to emerge with a more youthful appearance. Â Other people like Tanya just enjoy watching the spectacle.

We finish our day with a stop at the Nissan Brothers Olive Wood Shop in East Jerusalem. Some of the most beautifully carved olive wood can be found here as well as many other treasures. Itâ€™s been a long but wonderful day.