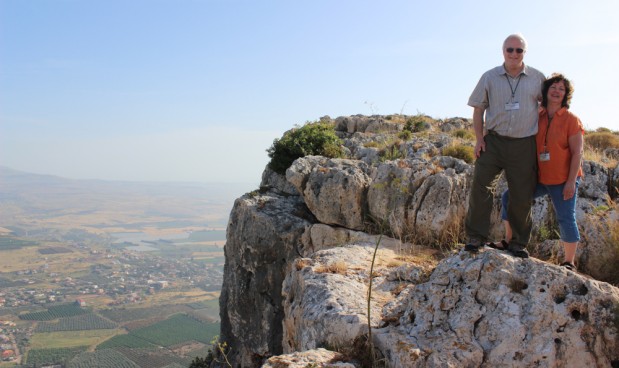 Today we check out of our hotel in Galilee, sad to leave this beautifully green region of Israel, but we are assured by Avi, our guide, that â€śthe best is yet to comeâ€ť. We begin our day with a rare treat as we climb to the top of the Arbel cliffs above Tiberius. We can see the whole Sea of Galilee from this spot and a spectacular view of the lush valley below.

Our journey takes us past Mt. Tabor, army bases, water reservoirs, Mt. Gilboa, watermelon fields, and a free “hotel” (a prison!) as we travel down the Jordan valley to a city called Bet Sheâ€™an.

Bet Sheâ€™an is strategically positioned in the Jordan Valley at the intersection of several ancient trade routes. It has been governed by a succession of rulers, including the Egyptians, Greeks, and Romans.

Ok, the ruins here are incredible; when you see it you say to yourself â€“ â€śwe need more timeâ€ť. You could easily spend a day here. If you want to get an idea of life in a big city in ancient times, this is one of the best examples on earth. It is impressive how sophisticated it all actually was.Â  Bet She’ an is a relativity new excavation. The city was destroyed by a severe earthquake in 749 C.E. It was abandoned and covered over with trash and dirt for years. Major archaeological excavations have only been done in the past 30 years.

We leave Bet Sheâ€™ an wanting more, but some of us are exhausted. Itâ€™s time for a break and Avi takes us to a nearby kibbutz called Ein Harod.Â  A kibbutz is representative of a communal life style. Many of the early settlements in Israel were built around this concept. Today there are still a number of kibbutz communities in Israel, especially on its frontier. We get our lunch today just the way the members of the kibbutz do, although we are guests and will not have to do the dishes. The food is fresh, well prepared and plentiful. We are thankful for the rest and refreshment.

After our meal we head back to the bus, now we make our Aliyah or â€śgoing upâ€ť to the holy city of Jerusalem.

A new stop for us is at the place where John the Baptist baptized Jesus as it is recorded in John 1:19-34 in the Jordan River. As we visit this site, we are blest to witness the baptismal service of a group from Zimbabwe. We enjoyed hearing them singing praises of joy, “I’m so glad that I can say I’m one of them.”

Nothing can really prepare you for that first look at the Holy City. Its stirs something down deep in your soul and it brings many to tears. We get our first look from the window of the bus as we drive up to Mount Scopus. We are anxious to get off the bus and walk to an overlook where we can really look at the city walls below. “This is it. Iâ€™m really looking at it.”

You are suspended for a moment between joy and disbelief. We are thanking God that we have made it to Jerusalem! We huddle together as Ken reads a Davidic song of ascent, a prayer for Jerusalem. (Psalm 122)

Â I rejoiced with those who said to me,Â â€śLet us go to the house of the LORD.â€ť

Â Our feet are standingÂ in your gates, Jerusalem.Â  Â

Â That is where the tribes go upâ€” Â the tribes of the LORDâ€” to praise the name of the LORD Â according to the statute given to Israel.

Â Pray for the peace of Jerusalem:

â€śMay those who love you be secure.

For the sake of my family and friends,Â I will say, â€śPeace be within you.â€ť

For the sake of the house of the LORD our God, I will seek your prosperity.

We pray and move back to the bus, as we must hurry; we have an important date to keep this night in Jerusalem.

We arrive in Jerusalem on the eve of Yom HaShoah. This is the day to remember the martyrs and heroes of the holocaust. Pastor Mark tells us that you canâ€™t really understand Israel without understanding the holocaust. It is something that touches the consciousness of the Israeli. To them the holocaust is not just a tragic event in history, itâ€™s their personal tragedy; the loss of their mothers, fathers, sisters, and brothers. The nation still mourns. A national day of remembrance was established in 1953. A national memorial was also established to honor those who perished, and to remind the world of the circumstances that led up to this horror. â€śNever againâ€ť is part of the mission of Yad Vashem. The place of remembrance, the place of the national memorial and museum dedicated to education about the holocaust.

Our group was invited to the state ceremony of the Holocaust Remembrance Day held at Yad Vashem, in the Warsaw Ghetto Square at the Holocaust Museum in Jerusalem. Â Security was extremely tight as our bus approached Yad Vashem. We were escorted through various security lines and as Pastor Mark told us, â€śWe are safer here tonight than anywhere else in the worldâ€ť.

It was a great honor for our group from America to be at Yad Vashem on such a solemn occasion as we join delegations from around the world. Â We heard speeches from President Shimon Peres and Prime Minister Benjamin “Bibi” Netanyahu as well as moving testimonies, the Youth Movement Choir (that will someday be the leaders of this country), and a renowned Jewish soloist named David Dâ€™Or.

It was a very moving and emotional part of the Holocaust Remembrance Day as we watched the lighting of six torches and heard the stories from survivors to remind the nation and the world that six million Jews died at the hands of the Nazis.

This is one part of the trip that will forever remain in our hearts and memories.

Pastor Mark Jenkins wishes to thank Christian friends of Yad Vashem for their kind invitation to be a part of this important ceremony.