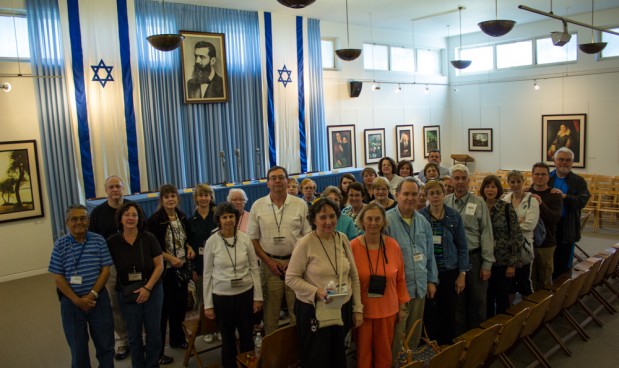 A group of pilgrims left VA with anticipation of seeing what God had for them in the holy land of Israel. Ā After a bus ride to Dulles and a long “day and night”Ā including time zone transitions, we arrived in Tel Aviv, Israel. Ā Tired but so excited!

After meeting our guide, our first stop is one that is meaningful to the nation of Israel. Ā So we would not miss this experience, the guide and staff kept Independence Hall open later than normal hours for our group.

Independence Hall, originally the Dizengoff House is where David Ben Gurion declared Israel a sovereign nation on May 14th 1948. This is also where he and other Jewish leaders signed Israelās Declaration of Independence. āIndependence Hall” is located on the historic Rothschild Boulevard in Tel Aviv, Israel.

We heard recordings of speeches from that historic day and also a recording of Israel’s national anthem – the HaTikvahĀ (means “The Hope”) – see words below.

If the statistics are right, the Jews constitute but one percent of the human race. It suggests a nebulous dim puff of star dust lost in the blaze of the Milky Way. Properly, the Jew ought hardly to be heard of; but he is heard of, has always been heard of. He is as prominent on the planet as any other people… His contributions to the world’s list of great names in literature, science, art, music, finance, medicine, and abstruse learning are also way out of proportion to the weakness of his numbers. He has made a marvelous fight in the world, in all the ages; and has done it with his hands tied behind him.

The Egyptian, the Babylonian, and the Persian rose, filled the planet with sound and splendor, then faded to dream-stuff and passed away; the Greek and the Roman followed, and made a vast noise, and they are gone; other peoples have sprung up and held their torch high for a time, but it burned out, and they sit in twilight now, or have vanished…

All things are mortal but the Jew; all other forces pass, but he remains. What is the secret of his immortality?

For centuries Israel as a nation has been little more than a Ā Bible story for most Christians, yet it remained as the hope (Hatikva) of nearly every Jew. Today we have the unique privilege to stand in the very spot where David Ben Gurion declared Israel a nation in direct fulfillment of many ancient prophecies – the impossible has happened -a nation is born and reborn in a day just as the prophets of old predicted.Ā  Israel has come at lastā¦ and itās come to us – itās come to our generation.

On this tour we will look at the biblical Israel, we will walk in the footsteps of Yehsua (Jesus), and you will see for yourself the ancient prophecies fulfilled.

Over the next week we will also come to a better understanding of Israel as it exists today. This includes some of the social, political and security challenges this tiny nation is facing. We will have an opportunity to learn more about Hebrew culture and customs as we walk among our Jewish brethren.

I pray that this Israel experience will strengthen you in your walk with the Lord, reassure you of the truth that is His word, and help you to pray for and speak in support of Israel and for our friends here both Christian and the Jew. Prime Minister Benjamin Netanyahu says that the Jew and the Christian have a shared history and a shared destiny, I believe he is right.

The following words to Israel’s national anthem, HaTikvah (“The Hope”) were written in 1886 by Naphtali HerzImber, an English poet originally from Bohemia: