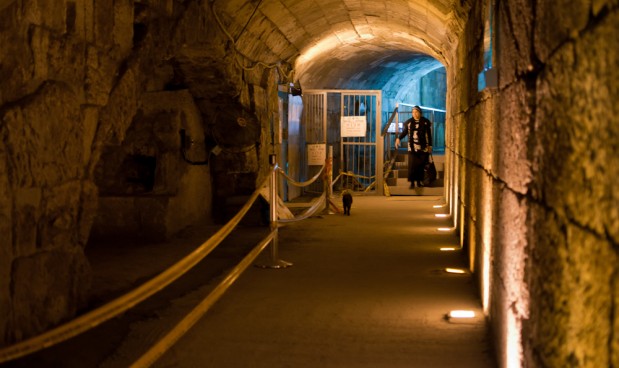 Today marks the beginning of our first full day of touring Jerusalem! This morning began early with a visit to the Wailing Wall, which is the only section of the Temple that remained after the destruction of Jerusalem in 70AD. We circled up and the men donned their yarmulke as we walked to our separate sides of the wall. The men and women are separated, so as to reduce distraction during time of prayer. The Wailing Wall is an amazing sight! What a wonderful privilege, to be able to reach out and touch stone that was around when Jesus walked the earth!┬Ā We all spent some time in private prayer, and also offered up prayers of protection for Israel.

Once we had regrouped, we journeyed underground to visit the Western Wall excavations! This is a tunnel leading under the Moslem section of Jerusalem where the original paving stones and some of the Western Wall, which the Wailing Wall is a part of, can be seen. This is also a place where we can say, ŌĆ£X marks the spotŌĆØ in YuvalŌĆÖs words, that Jesus would have walked. The section of road that has been uncovered is directly in between the Fortress of Antonia, where He was sentenced, and the house of Caiaphas the High Priest, where he was held and tried by the Jews. Jesus would have had to pass by this way! Yuval also points out a large, unfinished section of wall. He said that the workers had, for some reason, stopped working on this particular rock, and it was the ŌĆ£stone that the builders rejected.ŌĆØ Could this be the rock Jesus was referring to in his metaphor? It would certainly make sense! This road was once a main artery in Jerusalem, full of markets and people. The stone would have been noticed, and remembered.

We exited the tunnels for a brief walk through the Moslem quarter towards the Fortress of Antonia. This was where Jesus was brought before Pontius Pilate to be sentenced, and also where the ŌĆ£game of KingsŌĆØ would have been played on him. This was a game that Roman soldiers played on their prisoners, involving scourging, a crown of thorns and eventually, death. The outline of the game is still visible, etched into the stone. The Fortress of Antonia is also where He would have been publicly whipped. We were actually standing on stones on which Our Lord bled for our sins! It was a very moving experience. After some words and prayer from Pastor Becton and Dr. Wright, we returned to street level for another short walk in the Moslem quarter.

Our final stop in the Moslem quarter was the Pool of Bethsaida and St. AnneŌĆÖs church. The Pool of Bethsaida is where Jesus healed a crippled man on the Sabbath by telling him to take his bedroll and walk. Although much of the pool has been covered over the years, a lot can still be seen in the ruins, including the medicinal pools that the crippled man would have been attempting to enter. ┬ĀSt. AnneŌĆÖs church, a basilica built to honor MaryŌĆÖs mother, is maintained by the White Fathers, the same group that maintains the Pool of Bethsaida. The basilica has marvelous acoustics, and we were able to sing a few songs privately. Our tour group of 39 sounded like a choir of 300! Shortly after we finished our singing, we were treated to listening to a joyful Nigerian group praise our Heavenly Father.

We exited the Moslem Quarter through what is today known as the LionŌĆÖs Gate, but in ancient times was called the Sheep Gate. There, we were able to give the three IDF soldiers guarding the entrance some of our scarves with┬ĀPsalm 91┬Āwritten on them in Hebrew and in English. We had gotten these scarves earlier from a Richmond-based pro-Israel group called Hope for Israel, who makes them in order to give encouragement to the IDF as they are risking their lives to protect Israel.

After we ate a quick lunch at Kibbutz Rachel, which boasts a pretty view of Bethlehem, we drove to the Shrine of the Book. This site houses the Dead Sea scrolls discovered in Qumran, as well as boasting a huge, 1:50 scale model of what the Old City of Jerusalem would have looked like during the time of Christ. This model really helps you to get your bearings when you are thinking about how the city would have looked! Once Yuval explained some of the features of the model to us, we were allowed to have some time to wander through the exhibit for the Dead Sea Scrolls, which we were understandably not allowed to photograph. These scrolls are truly amazing. Before they were discovered, the oldest text we had of the Bible was only from the 1100s. So you can imagine what an affirmation it was when it was discovered that the scrolls, which were almost an entire millennium older, were 99.9% the same!

After leaving the Shrine of the Book, we made a stop at Yad Beshem, which is JerusalemŌĆÖs Holocaust memorial. Photography was not allowed here, either, due to the sensitive nature of both the items in the museum and the subject matter. This museum is not an easy place to visit. It is heart-wrenching to see the atrocities committed against the Jewish people, and worst of all against the children. Of the six million Jews that were killed during the Holocaust, a little over one million of them were under the age of 17. Some were as young as two or three. Personal belongings of Jews murdered during the Holocaust litter the museum. Shoes, combs, shirts, glasses, and precious heirloom jewelry alike were stripped from the bodies of the gassed, and tagged according to value. Pictures of experiments performed on children line the walls. Video testimonies of Holocaust survivors and resistance fighters play along almost every wall. At the very end of the museum, after you have seen all the tragedy inside, there is one last video playing. It features a group of children singing Hatikva, IsraelŌĆÖs national anthem, upon the founding of the state of Israel. With that hopeful, beautiful message in your head and in your heart, you walk out of the museum into a striking view of the thriving city. It is a beautiful reminder that, although the Jews have been horribly oppressed throughout the years, they remain, and their oppressors do not.

After leaving the museum, around 5:00pm Israel time, Pastor Becton made a call back to Virginia and had live prayer for Israel on the Victory Hour. What a wonderful way to close out our day! We should all remember to pray for the peace of Jerusalem, the city that God loves.