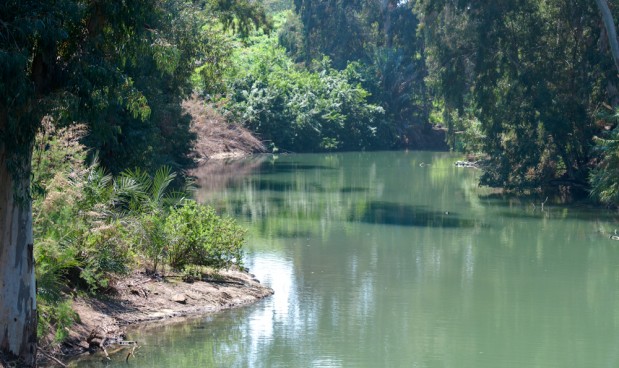 This morning we bid farewell to our hotel in Galilee, and began our journey southward towards Jerusalem. Our first stop today is Tabgha, also known as St. Peterâ€™s Primacy. This is where Jesus appeared to His disciples for the third and final time after His resurrection, and also where He absolved Peter of his denial of Him. This is a calm and scenic place, featuring a Catholic church and a stunning view of the Sea of Galilee. We could even see some fisherman plying their trade as we listened to Yuval explain the significance of Peter and Christâ€™s conversation. Afterwards, we all had a couple minutes to dip our fingertips into the Sea and collect a few shells and rocks.

Our next stop was Yardenit, the baptismal place along the Jordan River. Todd Sulc, Carly Murphy, Arielle Everett, Janis Warren, Dina-Marie Smith, Norma & Brian Richard, and Lisa Guriddi were baptized by Mark Jenkins in the cold waters of the Jordan! What an amazing experience, to be able to follow in the footsteps of Jesus so literally! After they had sufficiently dried off, we shopped for a little in the gift store before eating lunch at the restaurant on-site. We had a choice between chicken and St. Peterâ€™s fish. It was funny to see who ordered the fish again, and who went for the more familiar chicken!

Once we had finished our lunch, we set out for Bet Sheâ€™an, also known by the Greek name Skitopolis. Bet Sheâ€™an is the ruins of an ancient city destroyed by an earthquake in the first century. Massive, toppled columns and a wavy and broken main street attest to the earthquake damage, but some of the important buildings of the city have been restored, such as the amphitheatre. This massive structure is small for a theatre, but still impressively large.Â It really gives you a good feeling of how listening to a play or oration must have been! After spending some time climbing over the benches, we progressed to the cardo, or the main road of the city. The road, once a straight stretch of stone, is now wavy and the stones have been pushed up in places due to the damage caused by an earthquake. Once impressive columns that lined the side of the road are now half their former height, but the road is still striking. Walking down the ruined cardo really gives you a feel for what the city must have felt like when it was alive! It is easy to imagine street vendors hawking their wares, and children running through the columns playing a game.After we view a few other restored buildings, we were given some time to wander through the ruins on our own. Â Some of the more adventurous among us took the time to run up the massive Tel that overshadows the city. Although the climb is not easy, the sprawling view of Bet Sheâ€™an at your feet is well worth it. Even the majestic columns seem small! Bet Sheâ€™an is such a fascinating place, it is easy to feel that any amount of time spent in this ancient city is far too little. All too soon, we are back on the bus and heading towards our destination for the evening â€“ Jerusalem!

Although we had a long drive of about two hours ahead of us, the interesting scenery made it pass quickly. We even saw an entire herd of camels pass by! Boaz and Yuval were kind enough to pull the bus over so we could take pictures and watch them trot by. Once we had reached Jerusalem, the bus pulled over to an overlook on Mount Scopos, which gave us our first view of the Holy City, which was framed beautifully by the sunset. The last rays of the sunlight glinting off of the golden Dome of the Rock are enough to stir anyoneâ€™s heart. Pastor led us in prayer as we tearfully gazed upon the City of God with rejoicing and thankfulness. How amazing, that God has brought us to such a place! We lingered on the overlook for quite some time, drinking in our first view of Jerusalem. What a beautiful sight, and what a wonderful feeling of homecoming! First-time visitors and returning pilgrims alike felt the same call, the same sense of belonging as we gazed upon this ancient city.

We boarded the bus to continue our ascent into Jerusalem and our hotel for the evening, but not before making a stop at a shop selling some olive wood and antiquities. Quite a few of us came away with widowâ€™s mites, a small coin that was mentioned in the Bible several times. The store has a plethora of beautiful olive wood carvings depicting anything from nativities to scenes from biblical stories. It is easy to spend a long time in this store, simply because there is so much to choose from! Soon, we all find something that we cannot bear to leave without, and reboard the bus for our final drive to our hotel in Jerusalem. Tomorrow, we will begin our exploration of the Holy City!Today was a very special day for two of our tour members, Ben Jenkins (your photographer for this blog!) and Arielle Everett. They had the privilege of spending their birthdays in the Holy Land! We hope that you will join us in wishing them a very happy birthday.