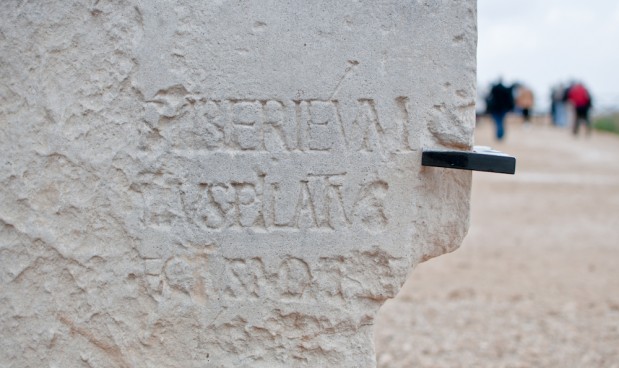 Our first full day of touring started off with a beautiful, cool, overcast morning that quickly turned to rain. Although a bit of a pain for us as tourists, Israel needs the rain badly to sustain their crop growth, so we could only be but so upset. We started the morning off with a visit to the ruins of Caesarea Maritima, or Caesarea-by-the-sea. This city, which was built by Herod the Great, was once a bustling port and has a beautiful view of the Mediterranean Sea. This impressive site contains the ruins of an amphitheater where Paul gave his testimony when he began preaching to the Gentiles, and a hippodrome where chariot races would have been held. The scale of the amphitheater and the hippodrome is immense â€“ itâ€™s amazing to stand on the stage of the amphitheater or the sands of the track and consider how many people once filled the stands! If you close your eyes, itâ€™s easy to listen to the crashing of the waves against the shore only a few feet away and imagine them as the roar of some ancient crowd. At the amphitheater, Pastor Mark shared his thoughts:

Israel is filled with unforgettable images. If allowed, those images provide some deeply personal lessons. Our first stop was in Caesarea. This was where Peter shared the gospel to the Roman Centurion Cornelius. If you remember, God had to prepare Peter for this by telling him not to consider Cornelius unclean because he was not a Jew. In his heart, Peter was not ready to take to Cornelius â€¦ and, God knew it.

Caesarea is also the place Paul was imprisoned for two years. The latter chapters of Acts record some of the conversations he had with ruling Roman officials. I stood in the place where Paul would have pleaded his case before a gathering that really didnâ€™t want to hear what he had to say. Yet, he was faithful to speak.

Peter and Paulâ€™s experiences in Caesarea hit home with me today. Peter caused me to ask God, â€śHow many of us unknowingly hold back sharing the gospel with an individual or a category of people because in some way they offend us?â€ť From Paul, I wondered, â€śHow often do we keep silent for fear of being rudely or even politely blocked out, because those we are talking to do not want to hear what we have to say?â€ť In either case, we fail to share because we were personally not ready for the opportunity.

Then, I was reminded ofÂ 1 Peter 3:15. It charges us to â€śSanctify the Lord God in your hearts and be ready to give an answer to anyone who asks you for the answer of the hope that is within you. But, do so with gentleness and respect.â€ť The key to being ready to speak to those you donâ€™t want to â€¦ or to those who donâ€™t want to hear you, involves getting your heart ready in advance. You have to sanctify the Lord God in your hearts. Loosely that means you need to start each day with establishing Jesus as the Lord of your life. Whatever he wants you do. Whatever he asks you obey â€¦ even if it means going to someone that makes you uncomfortable, or addressing someone you already believe will not want to hear you.

Walking where Peter likely walked and standing where Paul stood in Caesarea, Iâ€™m challenged to do as they did. I need to be ready to speak to anyone, any time, any place, anywhere.There was much to explore at Caeserea Maritima, including the remains of a freshwater pool that Herod had built right next to the sea, but we soon found ourselves back on the bus for a short trip down the road to visit an iconic piece of Roman architecture â€“ an aqueduct! This structure was once vital to Caeserea, bringing fresh water down to the city from the Carmel mountain range which was located a good 10 miles away. Although only a relatively small piece of the structure remains, it is amazing to think that they once stretched for miles around the Roman Empire. The aqueduct is located beside the cool waters of the Mediterranean, and some of the braver members of our group took the opportunity to bury their toes in the cold water before we got back on the bus for our next stop, Tel Megiddo.

We ate a quick lunch at the restaurant located in the museum at Tel Megiddo to help outwait the storm. Thankfully, as we finished, the rain eased up enough for us to ascend the hill to the fortress city. These ruins are among the oldest we will visit, with sections dating back to the time of the Philistines. This place is what is known as a Tel, or a biblical mound. A Tel is created when a city is destroyed or captured, and another rebuilt directly on top of it. This creates a layer cake of ancient civilizations! Yuval points out that in Tel Megiddo there are twenty five different stratas, spanning in age from around 2000 BC to 4 BC. Tel Megiddo is directly in the field of what will be the Battle of Armageddon, and offers a beautiful view of the valley.Â We explored the ancient cistern system, which took us underground down 183 steep and slippery steps, before we set off to beat the rain to Mt. Carmel.

Mt. Carmel is a beautiful site, and full of biblical significance. This is the â€śplace of the burningâ€ť, where God proved through fire that He is the one, true God. We gathered on the roof of a Carmelite cathedral to listen to Mark Jenkins recount the story of the prophet Elijahâ€™s struggle against the priests of Baal. It brings a new level of complexity to the story when you are literally staring down the side of the mountain where the priests would have fled after their humiliating defeat!Mt. Carmel also provides a stunning view of the Jezreel Valley, otherwise known as the Valley of Armageddon. It is difficult to imagine this huge valley, which spans almost as far as the eye can see, covered in blood â€śa bridle deepâ€ť during the end times. Our observation was made even more stunning as we stood in the one clear spot in the entire valley, and listened to two thunderstorms on either side of us dueling down on the plain. Although the valley is beautiful sight, it is also a sobering one, as we remember what the world will have to go through in the times that are quickly approaching. This lush, fertile land reminds us to pray daily for those of our friends who are donâ€™t know God.

Before we went to our hotel in Galilee, we made a quick stop in Nazareth to view the city from an overlook. Dusk had just fallen, and the city was lit up beautifully on the side of the hill. It was a fitting way to end our day â€“ a reminder that the ultimate good, our Savior, grew up overlooking the valley where His final victory will occur. Tomorrow, we will continue our tour by visiting The Mount of the Beatitudes, Caesarea Phillipi, The Sea of Galilee, and Capernaum.