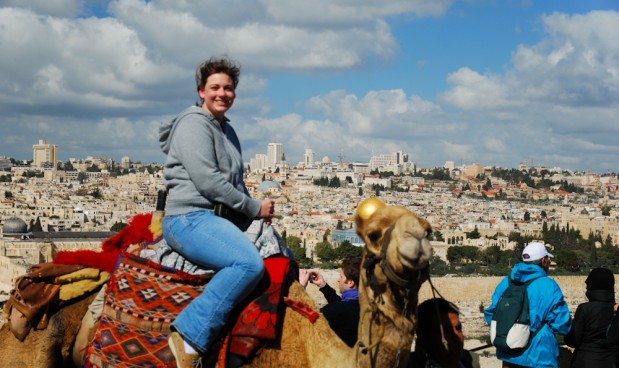 Today started off with a very blustery morning atop the Mount of Olives. Standing on the peak gives you an excellent view of the Old City and the graveyard at the base of the mountain. The Mount of Olives is also home to Kojak, who is probably the world least smelly camel. Of course, we could not miss the opportunity to take a ride! Once we had all had a turn, we started down the long walk from the top of the mountain to the Garden of Gethsemane. There is something really special about that garden â€“ it is very pleasant and calming. There are still olive trees there that date to the time of Christ â€“ which is over 2000 years old! The amazing thing is that they are still producing new branches â€“ through the gnarled, twisted trunks come shooting forth new life. What an excellent metaphor for our own lives! We entered the Church of All Nations, which stands over the place that it is though that Jesus prayed on the night of His arrest. It is also a peaceful place, filled with candlelight and mosaics. We lingered here only for a little before heading out to a private part of the garden for a special service from Pastor Ward and some personal time alone with God. It was easy to feel the presence of the Lord beneath the olive trees as we sat in quiet reflection and prayed. It really brought a whole new meaning to â€śquiet time with the Lordâ€ť. When we all joined back together at the mouth of the garden, we all boarded the bus once again and began to drive towards King Davidâ€™s tomb and the Upper Room. We stayed only a short time at both of these places, which are literally located one right on top of the other.

The upper room is representative of the upper room at the time of Jesus, while this is not the exact spot we know that it would have been very near this place. King Davidâ€™s tomb is also representative of the location of his burial. We know it is near here. This tomb is sacred to the Jewish people, and is the second most holy site in all of Judaism. (The Wailing Wall is the number one.)

Once we had left the tomb, we headed to the Caprice diamond center to have lunch. Yes, that Caprice. Israel is one of the biggest diamond polishing centers in the world. Once we had eaten, we went on a short tour of the facility and explored the showroom. Boarding the bus once again, we drove back to the Old City to visit the Pool of Bethesda, the site where Jesus healed the lame man. Not much remains of the pool itself, but even the ruins are still awe-inspiring. Also on the site is a beautiful church called St. Anneâ€™s, which has absolutely incredible acoustics. The walls are designed in such a way that a choir of 30 sounds likes 300! Amazing Grace is simply beautiful when sung inside. Leaving the church, we made a short walk to the Fortress of Antonia and the Praetorium, where Jesus was brought before Pilate. We stood on the 1st century pavement on which Christ would have stood. Etched into one of the pavement stones is the â€śGame of Kings.â€ť This would have been the game that the Roman soldiers played with Jesus, hence His being crowned the â€śKing of the Jews.” This is also the location where Pontius Pilate would have had Jesus publically whipped in an attempt to placate the masses thirst for blood. It was both chilling and inspiring to stand on the rock where the blood of our Lord was shed. We also took a moment here for prayer and quiet reflection before continuing on the Via Doloroso, or the Way of Suffering. It is generally accepted that this is the path that Jesus would have carried the cross towards Golgotha. Walking the same road that Jesus took while preparing to die for the sins of the world is not exactly easy to verbalize. We ended our walk not at Golgotha but at the Wailing Wall, where we all took another moment to offer up another prayer to God for all of His goodness to us. Today was a physically and emotionally draining day, so we headed back to the hotel a little early. This allowed some of the less-weary among us to enjoy some shopping on Ben Yehuda Street, which is a short walk from our hotel. Tomorrow is our last day in Israel! We will spend the day exploring Jerusalem, seeing sites such as the Garden Tomb and Golgotha.