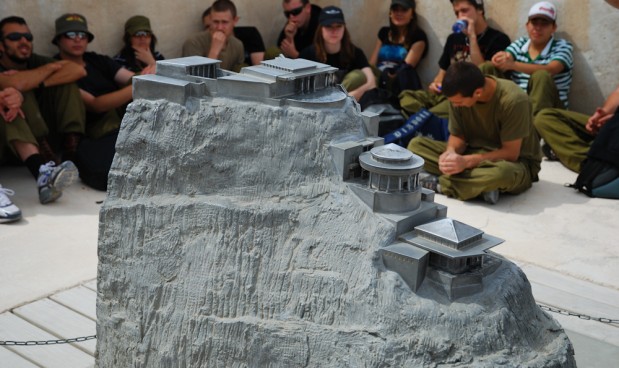 After breakfast, we waved goodbye to Jerusalem â€“ but only for the day. Todayâ€™s tour started with Masada, the desert fortress of Herod the Great. This fortress became a refuge for a band of Jewish rebels during the great Jewish Revolt that began around 66 AD. As we wandered through old storerooms, Herodâ€™s spa, and various courtyards, Yuval told us the story of the rebelâ€™s last days. The Romans, not content with simply razing Jerusalem, had been looking for this band of escaped rebels for almost four years. These rebels survived on Herodâ€™s stores and water from the spectacular cistern system which was in place. It was enough to support their group of nearly 1000 men, women and children. They lived in the abandoned buildings with some level of comfort. The Romans arrived at Masada and surrounded the fortress. They built impressive siege walls, and several camps around the fortress. For 8 months, the rebels held them off, until one evening they finally broke through the defenses. Believing this would all be over in the morning, the Romans returned to their camp. But the Zealot leader, Elazar, had other plans for his people. He gave a passionate speech and managed to convince the camp that it was better to die free than to live in slavery. It was decided that each man would slay his whole family, and then lots would be cast among the men. 10 would be selected to kill the rest, and then 1 would be selected to kill 9 of the remaining men. He would then kill himself. When the Romans walked in the next morning, they were shocked to discover bodies, and not resistance. Today, Masada is a symbol and inspiration to the Israeli army, who swear that Masada â€świll not fall again.”

After our visit to Masada, we traveled to Qumran for some lunch and shopping. This is probably the best place to stock up on Dead Sea products! After we had shopped some, we walked over to the ruins of the village of Qumran, which is where the Essenes, those that maintained what became the Dead Sea Scrolls had lived. We were also able to see cave Q4, where over 500 scrolls were discovered. Yuval told us the story of the Dead Sea scrolls, and ended with this interesting fact: on the day that the scrolls were discovered to be of historical importance, the UN decreed that Israel would become a nation again. God definitely had His hand on that situation! Once we had finished exploring Qumran, we drove a short distance to the Dead Sea, to do some swimmingâ€¦ or really disorganized floating. The Dead Sea is easily the weirdest body of water Ive ever been in. Its so full of minerals, its like swimming in olive oil instead of water. You bob up and down in the water, and honestly cannot submerge! The bottom is also coated in a thick mud, which some of the more adventurous in our group smothered all over themselves. Now significantly smellier, we boarded the bus again for the hotel. Tomorrow, we will get a chance to explore the Holy City some more!