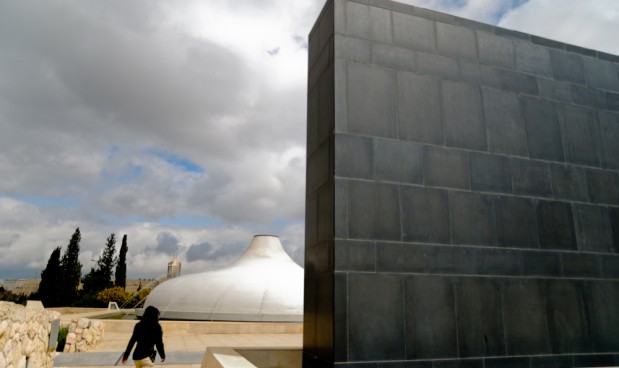 Today marks our first full day of touring in Jerusalem. We boarded the bus and started off to our first destination â€“ the Shrine of the Book. This place hosts not only the Dead Sea scrolls found in Qumran, but also a large scale model of Jerusalem as it would have been in Jesusâ€™ day. While I am not usually one for models, this really helps you get a handle on how the city would have looked. Using the model, Yuval pointed out the location where we believe Jesus was crucified, which differs from the place where the Catholics believe He was crucified. This site fits better because it is north of the Temple (according to Biblical direction) and outside the city walls, where crucifixions usually took place. The Catholic site is inside the city wall and to the east of the temple. After we examined the model, we continued inside to the Shrine of the Book itself. What an amazing display! The Dead Sea scrolls are the oldest known biblical text and when compared to the second oldest text, the Aleppo Codex, they match up 100%. The Codex dates to around 1100AD, while the scrolls date to the 2nd century BC! How amazing is it that nothing has been lost in translation for over a millennium! God had those scrolls stored away for a purpose, thatâ€™s for sure. The scrolls are amazing to see. Imagine staring at a page from the book of Isaiah dating to before Jesus was born! Sadly, no photography of the scrolls was allowed due to risk of damage. From the shrine, we headed to the Wailing Wall and the Western Wall Tunnel, but due to some barricades, we had to take a detour. Although it was about a mile walk, it was well worth it. The Western Wall Tunnel is something that is not to be missed.

Basically, it is an excavation of a tunnel under the Western Wall that leads to 1st century AD ruins. At one point, you are standing on the actual road from Jesusâ€™ time! The wall itself is an amazing example of architecture â€“ there is one massive stone that is 500 tons. As we walk further into the tunnel, we find an ancient gate that would have been used by the priest to enter to temple mount. Itâ€™s now the closest you can get to what would have been the Holy of Holies.

Another part of the wall is about 300 feet away from where the Holy of Holies once was. The entire tunnel has a surreal, otherworldly feel to it â€“ imagine running your hand along a wall where other people have been doing the same thing for two millennia! Once we left the tunnel, we spent some time praying at the Wailing Wall. We were able to spend a decent amount of time at the wall before continuing on to lunch. Due to the road blockages, we had to walk about another mile and a half to make it to the bus. Despite the length of our journey, it was nice to be able to explore the Jewish quarter and see the new synagogue. After we finally reached the bus, it was a short journey to a small strip mall, where we had a choice of falafel or shwarma â€“ a grilled turkey and veggie concoction, served in a pita â€“ very yummy! We also took some time to explore the strip mall, and found a bakery that had fantastic baklava.

Once we boarded the bus again, we drove to the house of Caiaphas, the high priest at the time of Jesusâ€™ crucifixion. This site is significant since Jesus supposedly committed the crime of blasphemy, He would have been held in the dungeon of the high priest, which was located in the basement of his house. Today, a Catholic Church stands overtop the remains of the house, but the dungeons and foundations are still reachable by a set of stairs. The dungeon â€“ and the pit where they kept the prisoners â€“ was not an easy sight. Yuval pointed out where they would have chained the prisoners to the ceiling to be whipped or scourged. Our next stop was the pit itself. Although we used stairs to get down, these were a fairly new addition. Prisoners would have been lowered in via a hole in the ceiling. The pit is a small space, not really even big enough for 30 people to stand shoulder to shoulder. The room is made of large, rough rocks and has high ceilings with a window for guards to look in on the prisoners from. It is a very austere and foreboding place, to be sure. Pastor Ward took the opportunity to read to us from Psalm 88. This is another one of those places that does not translate well into words. The best thing I can tell you back home to do is look at the pictures, read Psalm 88, and picture the pit in your mindâ€™s eye. It is really something that has to be experienced, and not described. Stepping outside of the pit and into the courtyard, we were able to see a set of steps that we can say with a large degree of certainty that Jesus would have walked down. Once we left the house of Caiaphas, we decided to end the day a little early and return to our hotel for some downtime. At dinner, we enjoyed some birthday cake from Dale for Terrie and myself â€“ both of us are having our birthdays in Jerusalem!