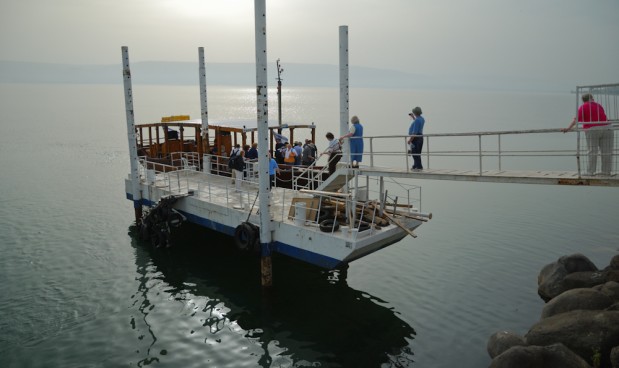 Todayās tour started off with a stop at Tabgha, the place where Jesus appeared for the final time after His resurrection to Peter & the disciples. The disciples were fishing nearby. They were astonished to see Jesus waiting for them on the shore. He had prepared a breakfast for them; cooked over hot coals just like the hot coals that Peter warmed his hands over on the night he denied Christ outside the house of Caiaphas, the high priest.

Peterās meeting with the Lord on this shore must have been a tender moment of forgiveness and encouragement. Yuval shared some absolutely fascinating numerology concerning the number of fish caught by the disciples that day (153) and the numbers corresponding to the letters that form the Hebrew words for āI am Godā. Make sure you check out the photograph! After Tabgha, we had a very short trip to Capernaum.

This city was the place where Jesus did most of His miracles, including healing Peterās mother-in-law, healing the women with the blood sickness, and the healing of the cripple that was lowered through the roof. The main thing to see in the city is the āWhite Synagogueā.

This partially restored 4th century structure stands on the very foundation of the synagogue where Jesus taught. We sat on stone benches where the men in the congregation would have sat, and Pastor Ward led a short service for us. There were many other neat things to see in Capernaum, including Peterās house and an olive press. Yuval shared some fascinating insight into the symbolism of the olive press. Basically, Gethsemane means āolive pressā in Hebrew.

To make the olive oil, the olives underwent three different pressings. The first one was used for anointing and cooking. The second pressing was used for light (oil lamps) and healing, and the third for cleansing. If you recall, Christ left his disciples to pray three times in Gethsemane. He was āpressedā three times. First, he was anointed. Second, He came to heal and light the world, and third He has washed our sins away.

After Capernaum, we quickly popped into a small Greek Orthodox Church nearby, much to the joy of Kathy Agnor, our Greek Orthodox group member. We enjoyed their lovely gardens (complete with peacocks) and listened to the priest explain the iconography on the walls. After leaving the church, we began the hour long journey to Bet Shean. The long ride was totally worth it.

Bet Shean is the ruin of a Roman City, which was built around a Tel that dates back to the time of King Saul. The city was destroyed in 749AD by a massive earthquake. Everywhere you look, there are ruined homes, toppled columns, and destroyed streets. The ancient city also boasts a magnificent amphitheater. You can really imagine how it would have been to walk down a Roman street. The amphitheater itself is largely intact ā all the original seating is still there and some of the walls are still standing. Itās very impressive! One of the most amusing things we saw was probably the toilet. Yes, the toilet. Most of the original āseatingā is still present, so of course we had to make good use of it. Some of the more adventurous (read: crazy) among us ran up the huge Tel.

The view was lovely, even if we became incredibly winded and tired in order to get to it. After reluctantly (at least on my behalf) leaving, we traveled to another kibbutz to have some lunch.

Once we had eaten our fill, we got back on the road for our two hour drive to Jerusalem! Though we were pretty wiped from the stifling heat in Bet Shean, we were all excited for our first glimpse of the Holy City. We stopped on Mount Scopos for an overlook into the city, and it was simply amazing. Even through the haze we could plainly see the Dome of the Rock and the Ascension Tower. It will absolutely take your breath away. Itās almost impossible to describe the feeling you get when you first lay eyes on Jerusalem ā itās like coming home. I know that sounds strange, but thatās the best way I can think of to describe it. We continued on into the city itself, and stopped at a wonderful olive wood store before heading to our hotel.

This store was one that Mark and Terrie Jenkins had visited many times before and they knew the proprietor, George Nissan, very well. It was filled with intricately carved nativity scenes, animals, crosses, and other wonderful biblical illustrations. We spent a good deal of time in the store, simply because it was so hard to pick out what you wanted! We all found something we simply couldnāt live without, however, and were soon on our way to our hotel in Jerusalem.