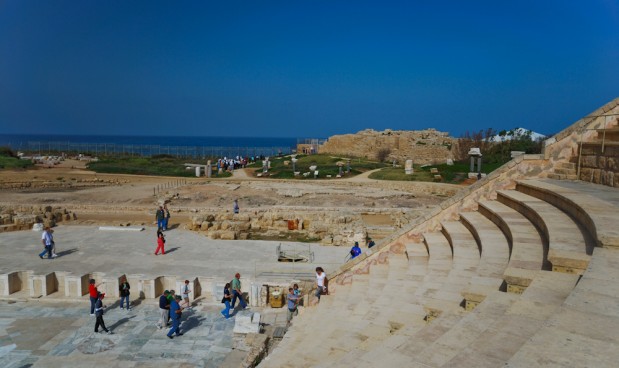 Our first full day of touring was an exciting one. We left our hotel in Tel Aviv this morning after breakfast and headed straight for the ruins of Caesarea Martima, or Caesarea by the sea. Caesarea is the location of the Roman amphitheater in which Paul gave testimony. It is still an impressive site, even in ruins. Two tall sections of seating still remain, and imagining its missing third section inspires all that more respect for Roman era engineering. The ruins at Caesarea also include a horse race track, or Hippodrome (think Ben-Hur), this thing is huge and now fully excavated; standing on the track you could get a sense of what these grand chariot races would have been like.

Built by Herod the Great, Caesarea is a city with a long history. It was major a port for both the Roman and later Byzantine empires. It eventually fell to the control of the Moslems, and then to the Crusaders. We got the opportunity to explore a Crusader Castle complete with dry moats on our way back to the bus.

A visit to Caesarea Maritma is not complete without at least a look at the aqueduct that brought freshwater from the Carmel mountain range over 10 miles to this famous city on the coast. The aqueduct is an impressive site on the shore of the Mediterranean. This was our chance to dipping our toes in the cool blue Mediterranean, after which we boarded the bus for lunch on the way to Mt. Carmel. We stopped on the mountain for falafel and chicken pita sandwiches. Bellies full, we traveled a short distance to “the place of the burning.”

This is where God proved by fire that he was the one true God. We gathered our group in a shaded spot and Paster Mark recounted the story of that famous contest between Elijah and the priests of Baal.

Mt. Carmel provides an excellent overlook of the valley of Jezreel also known as the Valley of Armageddon. The valley itself is absolutely beautiful and as Pastor Mark pointed out what we are seeing is the fulfillment of biblical prophecy as the land of Israel has become like another Eden.

From Carmel, we descended to the Jezreel Valley on our way to Tel Megiddo.

A tel or biblical mound is the result of settlements built on top of the ruins of previous settlements. Tel Megido has 25 such layers beginning with the time of the Canaanites. Standing on a slight hill overlooking the ruins, Yuval calls our attention to the divide formed in the Valley of Armageddon. On one side stands both Mt. Carmel, the site of Baal worship, and Tel Megiddo site of child sacrifices and other hideous practices. Directly opposite is the town of Nazareth, the place of Christâ€™s childhood. Here there is a symbolic struggle between Good and Evil, which foretells the literal battle in the future. As we continued to explore the ruins of Megiddo we came upon an ancient water system. We journeyed down into the deep, dark system until we exited the other side. The bus had been brought around to meet us.

Our next stop was Nazareth. Yuval led us to a precipice outside the city where Jesus was brought by an angry crowd after he taught in the synagogue. They had planned to throw him off the cliff, a form of execution like stoning, but Jesus â€śwalked through the crowdâ€ť and left Nazareth. This precipice has a commanding view of the city of Nazareth, as well as the surrounding area. We all posed for pictures, and then reluctantly shuffled onto the bus for the ride to our hotel in Tiberias.

After a nice dinner, we are heading off to bed. Tomorrow itâ€™s the Sea of Galilee, the Mount of the Beatitudes, Caesarea Phillipi, and the River Jordan